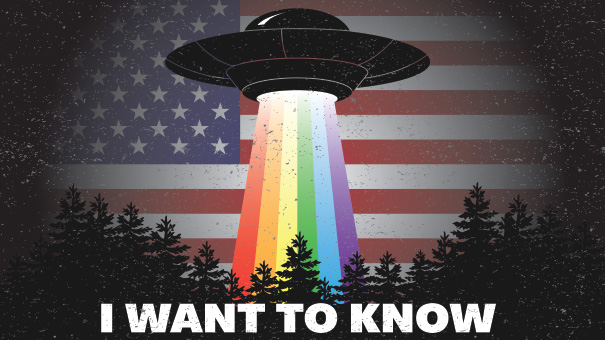 Gays and UFOs in the Military

The U.S. Department of Defense Directive “Don’t Ask, Don’t Tell” supposedly protected closeted queers, provided they stayed closeted. It ran from 1994 to 2011, but was well in place unofficially for time immemorial. Except for the part about protecting the closeted people, no one was safe if they were suspected of being light in the combat boots. 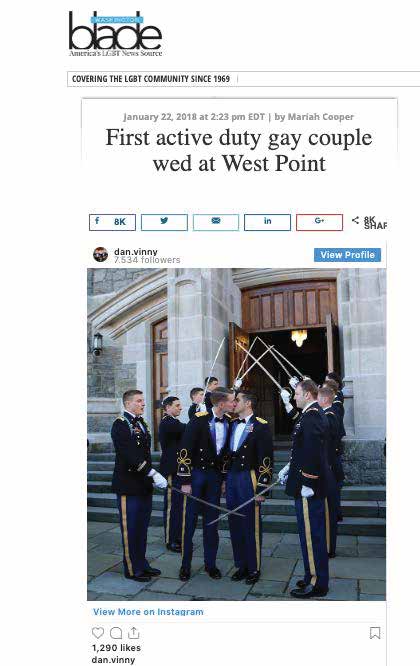 “But despite what we’ve been through, nothing was worse than having served during the ‘don’t ask, don’t tell’ years.” Vinny Franchino, Washington Blade

In any case, the celebratory union seen above would have been science fiction in the 1950s—or a communist plot. Gay marriage didn’t have its first legal precedent in America until 2004. Now of course the comparison with the UFO phenomena isn’t exactly the same. It’s not as though people doubted the existence of homosexuals, they just didn’t want them in their ranks.

There are striking similarities between the LGBT community and UFO witnesses, experiencers, or “believers”. Both groups suffer from ostracization and ridicule, being gas lit for having unconventional thoughts, and having their livelihoods and dignity stripped when they are discovered.

Pilot Andy Danzinger flew President Barack Obama during his 2008 presidential campaign and shared a sighting he had in the 1980s of a remarkable, enormous spherical object that changed shape. Danzinger explained to Fox News: “And the way people tended to be ridiculed about all this, you just kinda kept quiet.” He went on to explain that since he’s come out fellow pilots shared with him that “Wow, maybe this is finally going to get the stuff out…I’ve seen stuff, and it’s about time somebody came forward.”

Viral marketer and professor at the Wharton School of the University of Pennsylvania, Johan Berger writes in Contagious: Why Things Catch On: “The desire for social approval is a fundamental human motivation.” Unfortunately, progress just doesn’t seem to work based on conformity.

This coincidence between scientific arrogance and a new social trend illustrates an important fact in our society: while science consistently refuses to consider phenomena that lie outside the safe regions of its current understanding, the public is eagerly reaching for explanations that fit its experience.” Dr. Jacques Vallee, Dimensions

We live in a time that glorifies the innovator or disruptor, particularly in social and technological matters. Perhaps that’s why we’re seeing this new take on the UFO phenomena that is washing across mass media. Historically, the innovator is generally a divisive figure, enduring great resistance. Everett Rogers explains in Diffusion of Innovations: “While an innovator may not be respected by the other members of a social system, the innovator plays an important role in the diffusion process: that of launching the new idea in the social system by importing the innovation from outside of the system’s boundaries.”

As progressive as this new conversation appears to be, there’s a fair amount of revisionist history taking place on the UFO subject. Activity has been reported by skilled aviators (military and civilian), scientists, politicians, and scores of regular folks since World War II. The recent U.S. military encounters with unknown somethings, revealed in The New York Times article Glowing Auras and ‘Black Money’: The Pentagon’s Mysterious U.F.O. Program, have the same remarkable performance characteristics that people have been reporting for decades. The secrecy and shaming perpetrated by our governing bodies (including academia) shouldn’t be so quickly forgotten.

If cognitive dissonance hasn’t kicked in, read on

Famous supporters and witnesses include Ronald Reagan, astronaut Edgar Mitchell, Aaron Rodgers of the Green Bay Packers, and former governor of Arizona Fife Symington. Senator. Hillary Clinton was one of the first in the recent wave of official figures speaking out on the subject of UFOs. She told The Conway Daily Sun in December, 2015, “I think we may have been (visited already).” Aerospace mogul Robert Bigeolow, next came out of the UFO closet on 60 Minutes in a big way: 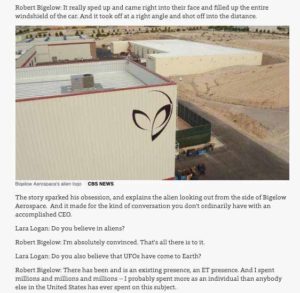 Now we have the mainstream media reporting  that the Navy is drafting UFO reporting procedures—a decidedly positive turn from the alternative of psych evaluations and career suicide. A moment later there’s an admission from The Pentagon’s Christopher Sherwood—they’ve been studying UFOs for longer than they’ve let on, with The Advanced Aerospace Identification Program (AATIP), which officially ran from 2007-2012. They did little until recently to validate or own information around its name, purpose, and duration of operations.  And this last week there was more mainstream coverage of testimony from pilots and radar operators.

There seems to be a lot of rebranding that’s taking place. UFOs are now referred to as Unidentified Aerial Phenomena (UAP) by many officials. It may help diffuse the stigma, and reframe the discourse, but it also white washes and even attempts to erase the past. Project Blue Book was one of several prominent programs designed to “study” the phenomena, when in fact that was the opposite of its true purpose. Edward Ruppelt was the Director of Project Blue Book from 1951-1953 and coined the term ‘UFO’. In a correspondence with researcher Donald Keyhoe he wrote: “We’re ordered to hide sightings when possible, but if a strong report does get out we have to publish a fast explanation—make up something to kill the report in a hurry, and also ridicule the witness, especially if we can’t figure out a plausible answer. We have to even discredit our own pilots. It’s a raw deal, but we can’t buck the CIA. The whole thing makes me sick—I’m thinking of putting in for inactive.” What’s being reporting isn’t new, it’s just being newly sanctioned for conversation. It’s not quite as fashionable as having and serving with gay friends, but momentum is building fast.

A brand is the intangible sum of a product’s attributes: its name, packaging, and price, its history, its reputation, and the way it’s advertised.” David Ogilvy, Ogilvy On Advertising

The dissemination of information and advertising surrounding this new UFO brand is intriguing. Much of the testimony and evidence is being curated by the civilian business To The Stars Academy—run by a famous musician, ex-intelligence operatives, political figures, scientists, and academics. Perhaps we live in a time when there is so much distrust of officialdom that this is the only way people will listen. It also has a bit of the being on the DL vibe—the powers that be letting someone else put themselves out there, while they stay in their cozy, traditional lifestyle of Newtonian physics, fossil fuels, and war mongering. At the very least this is like letting Mom break “the news” to Dad for you while he watches the game.

For the long and winding history of UFOs, from which Ruppelt’s correspondence was reproduced, Richard Dolan’s UFOs and the National Security State, Volumes 1 & 2 are critical, meticulous, cautious, and brave studies and chronicles of this obfuscated subject.  Leslie Kean has been co-authoring The New York Times articles previously mentioned and wrote a highly credible book (with many contributions from high-ranking officers, military service people, and reputable commercial aviation personnel), titled: UFOs: Generals, Pilots and Government Officials Go On The Record.

So, why the new-found openness? What is happening behind the scenes? Does someone know we’re about to see some pretty amazing things and the secret can’t be held anymore? Is the promise of unifying the human race becoming as tantalizing as it is necessary? Does someone know more about alternative/green energy sources and physics than the de-classified world? It seems we’ll be finding out very soon. Meanwhile, the Stonewall Riots have a golden anniversary on June 28, we continue to squabble about other walls, and perhaps this is a chance to build bridges instead—across space and dimensions, and between hearty, curious souls. Happy Pride this June and UFO Day on July 2.